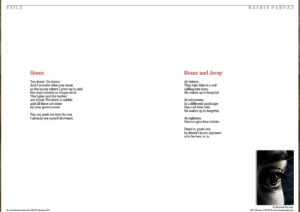 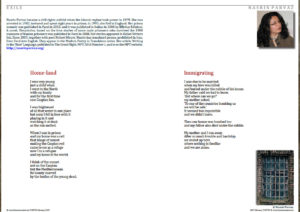 Nasrin Parvaz became a civil rights activist when the Islamic regime took power in 1979. She was arrested in 1982, tortured and spent eight years in prison. After her release in 1990, Nasrin resumed her activities and once again she found herself being followed by Islamic guards. She realized she could no longer stay in Iran and she fled here to England, where she claimed asylum in 1993. Nasrin’s prison memoir was published in Farsi in 2002. A summary of her memoir was published in Feminist Review (number 73) in 2003; and it was published in Italian in 2006 by Effedue Edizioni. Nasrin’s stories appeared in Exiled Writers Ink, and two of her poems were published in Over Land, Over Sea, Poems for those seeking refuge, published by Five Leaves, in 2015. END_OF_DOCUMENT_TOKEN_TO_BE_REPLACED